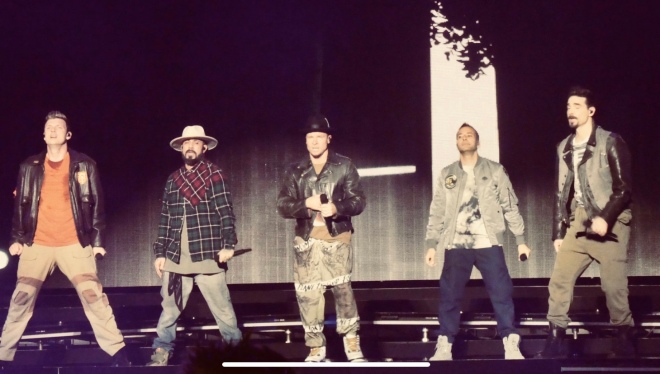 Backstreets back alright!!! After a month of Take That I needed a change in boyband and last weekend it was Backstreet Boys.

They didn’t have a band or any dancers, it was just a backing track, a lot of lighting and their original dance routines. That’s all they needed to transport us back to the 90s. They kept reminding us that they have been around for 26 years (I don’t need to be reminded that I’m old).  I through when they have been around for over 30 years like Take That maybe they will slow down the tempo speed as well.

Last time I saw the Backstreet Boys they were Kevin-less (who happens to be my favourite) and they were on a joint tour with New Kids on the Block – NKOTBSB back in 2012, so Donnie Wahlberg filled my hole in my heart. This time he was back and it was just them and their back catalogue along with a few snippets from their new album DNA.

So, what about the other boybands in my life. I’m too young for Wham and Duran Duran and pretty boy singers before them. Adam Ant was my first true love (seeing him in November) and the others…

Bros (Luke*): late 80s, beer bottle tops on shoes, ripped jeans and a rivalry with Wet Wet Wet. I loved them both.

New Kids on the Block (Donnie*): early 90s, grew a rats tail hairstyle like Donnie, too young to go and see them in concert on my own and had to wait until their comeback tour in 2007. I love Donnie in Blue Bloods and a trip to Wahlburgers London is on my bucket list.

Take That (Jason now Howard*): At the start I through they were a NKOTB rip off but after I took my sister and her friend to their first arena tour back in 1993 I was hooked. 27 concerts later they are still excellent. I listened to their breakup press conference on my radio Walkman so we didn’t have mobiles back then,  so I had to meet my sister and her friends on the way home from school to give them the bad news.  I think if there was no NKOTB there would be no Take That, and if Take That’s comeback was no so successful NKOTB would not have reformed.

Boyzone (Shane*): Take That split up on the Tuesday, we were camped outside Birmingham Ticket Office on the Saturday morning waiting to buy tickets for Boyzone’s first arena tour. We got front row as well. Broken heart was healed. We went to their last ever tour the start of the year.

Westlife (Shane*): A couple of concerts and a few record signings. They were the easy listening boy band. Not bothered about their comeback, I need to save the £100 per ticket to put it towards a Bon Jovi ticket.

Backstreet Boys (Kevin*): see above.  I did like a few NSYNC songs as well but they never tried to try break the UK market.

Blue, 911, 5ive: Saw them at a lot of local radio’s Party in the Parks and a few of their concerts. Good shows but in the same league as the above boy bands.

And One Direction? I’m way too old for them…

*my favourite member of the band.

This is a text widget. The Text Widget allows you to add text or HTML to your sidebar. You can use a text widget to display text, links, images, HTML, or a combination of these. Edit them in the Widget section of the Customizer.
%d bloggers like this: